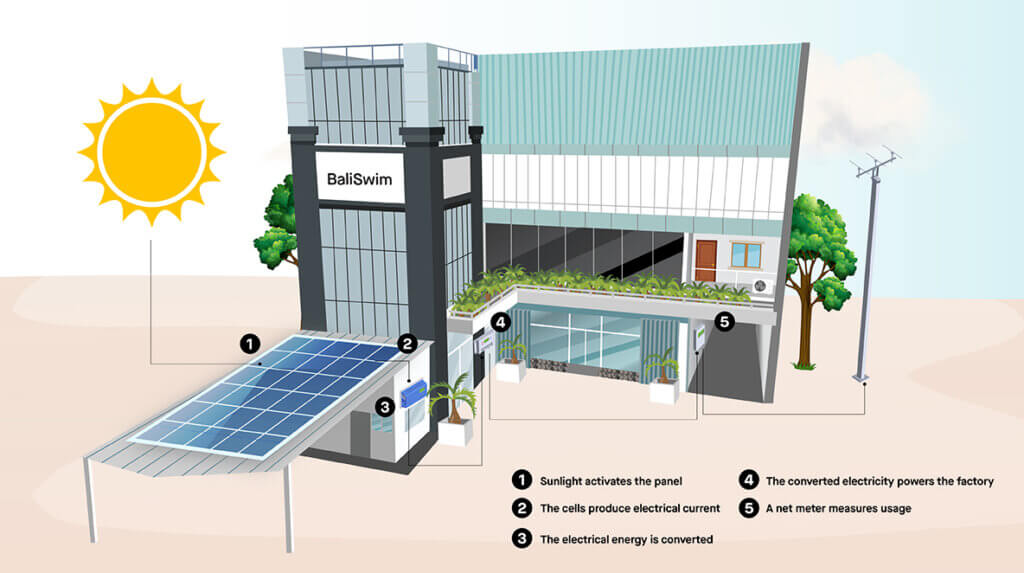 Bali Swim run on the sun! As part of our goal to make a net positive impact on the planet, we’re now invested in and run on the most solar-powered factory in Bali, which may also be the greenest.

How do solar panels work? 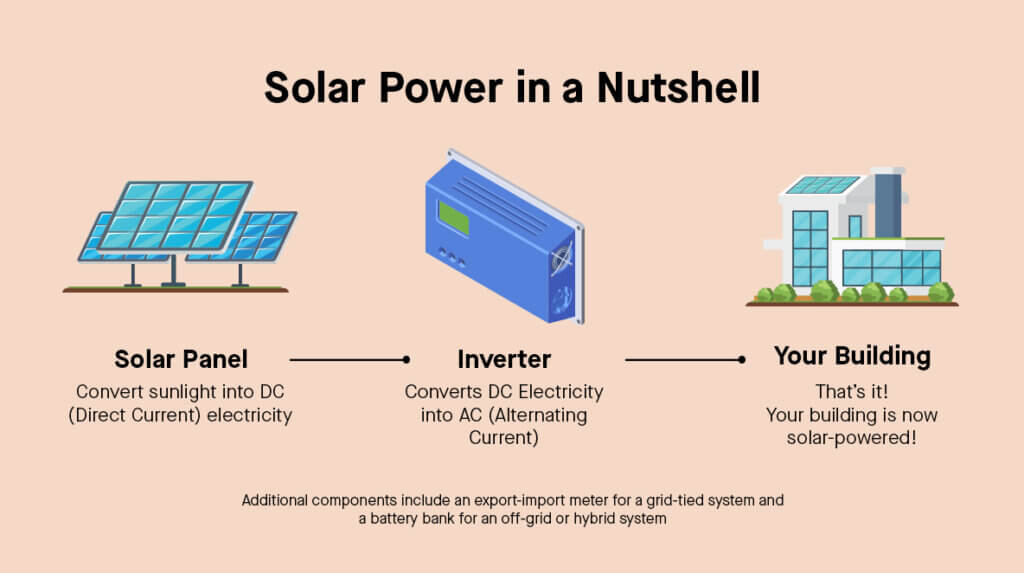 You might wonder, how do solar panels turn the sun’s energy into power? It’s pretty simple.

Solar panels consist of many smaller cells called photovoltaic cells. The solar panels capture photons and particles from the sun, which are then turned into DC (Direct Current) electricity.

This is where the solar inverters take part and convert DC electricity into AC (Alternating Current), as most appliances use it.

A solar system usually consists of 3 to 4 primary elements: solar panels, one or more inverters, a net meter (if you’re connected to the grid), and batteries (for hybrid and off-grid solar systems).

Why are solar panels ideal for manufacturing?

Since the industrial revolution, factories have become the world’s largest energy consumers due to their mass scale and sheer volume focusing on one location. As a result of the significant energy costs due to manufacturing, companies have decided to use solar power as the best way to reduce operating costs.

A lot of the excitement around solar power is due to the dramatic decline in price across the globe. Around the end of 2016, solar power became the world’s cheapest energy source, surpassing wind and its fossil fuel counterparts, such as natural gas.

For commercial applications like corporate offices and manufacturing plants, solar power’s benefit is that most energy use occurs only during the day. Massive commercial plants can use solar power without buying a storage solution covering energy usage during the night.

Below are other factors of why we embrace solar energy:

The need to go green

The government is gradually planning to build more solar farms throughout Indonesia, which is estimated to decrease greenhouse gas emissions by up to 41% by 2023. With that in mind, installing solar systems at our factory may also speed up switching to a greener and more sustainable energy source. If you can change to a more environmentally friendly power source, both you and the planet will be happy.

Quoted from the Green Match, solar energy is known to have the least impact on the environment compared to other energy sources. Solar energy’s advantages are that it doesn’t produce any greenhouse gasses, doesn’t pollute water, requires less maintenance and doesn’t create noise pollution.

The endless source of power from Bali’s sunlight

Due to its tropical location, Indonesia receives sunlight all year round, and Bali is no exception. On average, 1kW of solar PV (photovoltaic) systems in Bali create 4.2 kW-hours worth of electricity every day.

Therefore, besides creating products out of sustainable materials in Bali Swim (including packaging, labelling and printing), our power source is mainly derived from Bali’s sun. If you’ve worked with us for a while or are new to us, rest assured that the products you buy are made with the world in mind.